The annual Brit Awards are always a highlight of the UK music calendar. 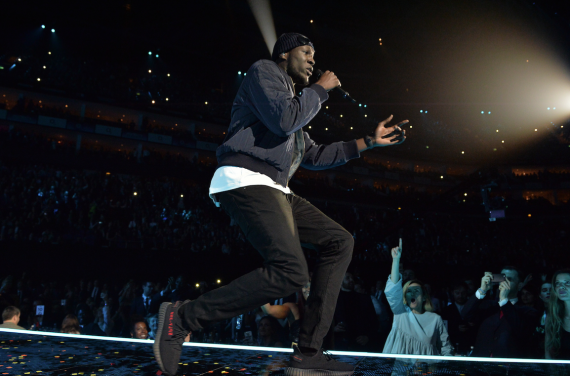 STORMZY STORMS ED SHEERAN’S PERFORMANCE FOR THE HIGHLIGHT OF THE NIGHT, THAT HAD THE ARENA STANDING.

It’s the biggest British music show that celebrates commercial music successes across the past 12 months, and always comes in for polarizing views the morning after. 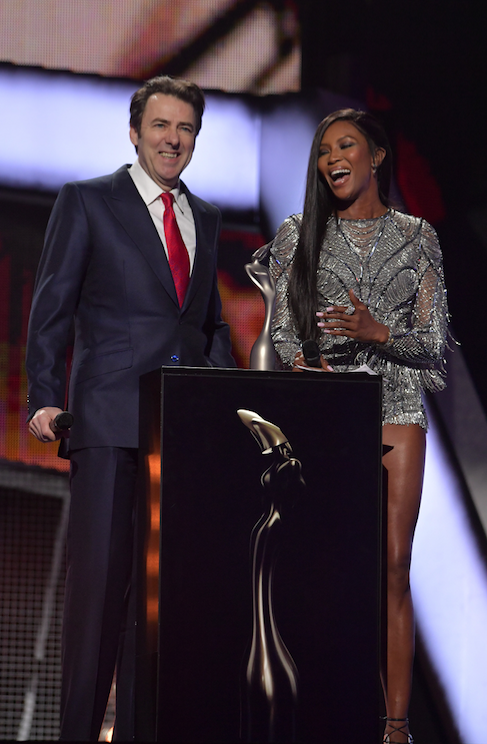 Well this year, I thought it was a great show. Not perfect but nearly. Certainly one of the best in many years. It felt truly reflective of the UK.

The dress code was ‘’glamorous’’ and the ladies went all out with mostly long gowns. Long black sequins and capes were in vogue. 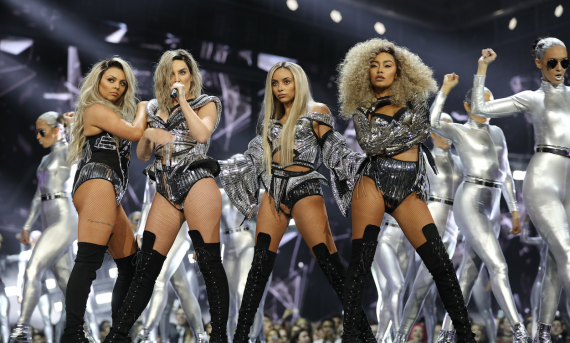 GIRL BAND LITTLE MIX KICKED OFF THE SHOW WITH A BIG, SPECTACULAR SET.

Simon Cowell’s Girl band Little Mix came out the stables strong, with a big production opening act, where alongside 50 dancers all spray painted silver, they gyrated through a Bob Fosse style dance number which had huge impact with stage, set, lighting and pyro. The girls clearly enjoyed the rest of their night at their table laughing and shrieking alongside two of their premier league footballer dates. 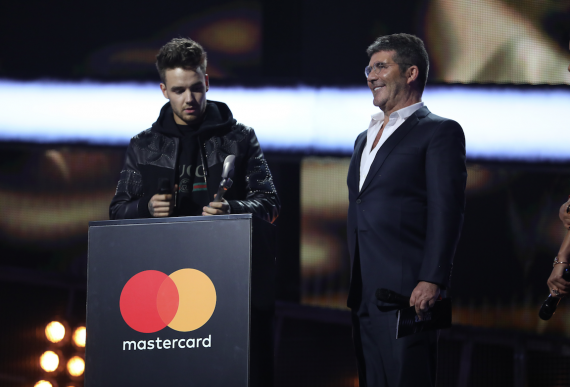 Simon Cowell presented One Direction Member, Liam Payne with an award. Despite splitting in 2015, One Direction won an award at the 2017 show for British Artist Video of the Year for History, which was released in November 2015. 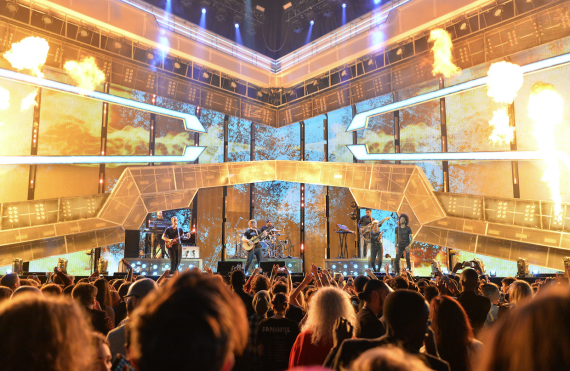 I miss the past moments that made it big when they used to pair up acts like Kylie and Justin Timberlake or Rihanna and The Klaxons, or Dizzee Rascal and Florence Welch. Those were once in a lifetime not to be missed moments. Resource and time means that this isn’t always an option any more but last night they had a hit this year with Ed Sheeran who paired up with grime superstar Stormzy. 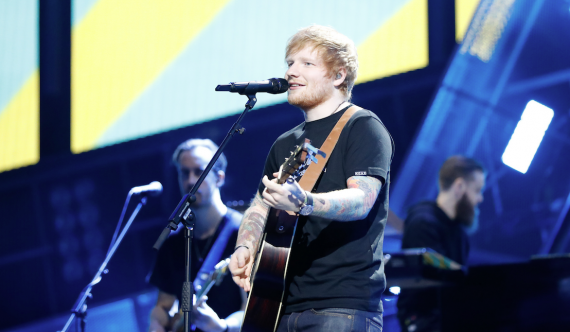 Grime is a musical representation of UK street culture (definition by Stormzy), and it has a huge cultural influence that’s slowly being matched commercially across the globe, with the scene performing to sold out arenas as far flung as Japan to the USA. 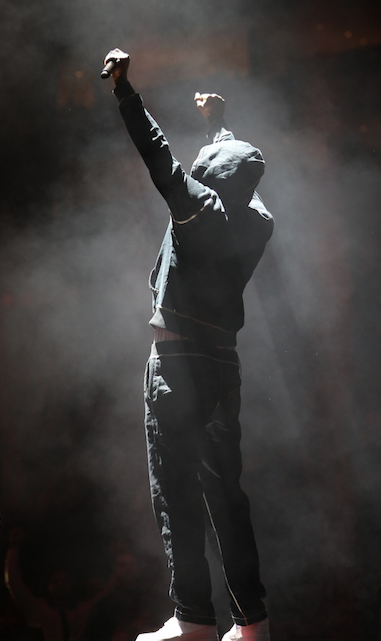 Similarly, grime star Skepta’s performance was a literal miracle as the Brits have a history of rarely giving a platform to British black, grimy, hip hop bods a stage set. The fact that he had a set was a great look. Skepta, in turn, also tipped his hat to his musical inspirations, with a huge wall filled with images of hundreds of rappers like Jay Z and Wu Tang who laid the path before him, projected up behind him as he energetically leapt about the satellite stage mid-arena. 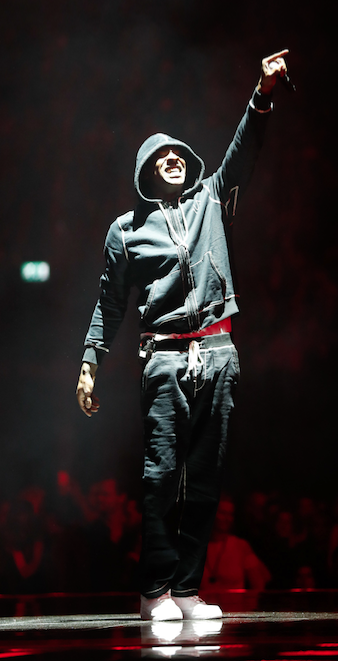 SKEPTA PERFORMS HIS BIG HIT FROM LAST YEAR- SHUT DOWN.

Soul singer Emeli Sande is that solo graceful singer that always delivers and it was refreshing to see her winning best female. 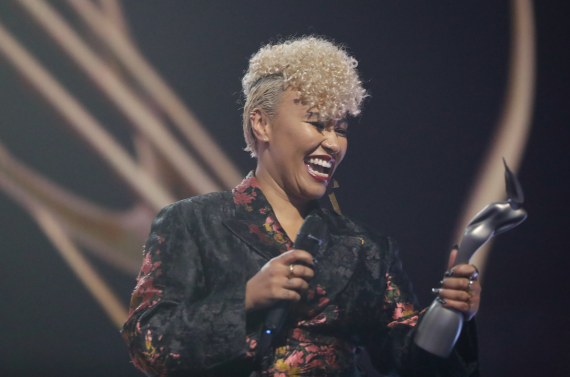 The fact that she makes it all look so calm and easy means these still fire in her belly and in the future she will deliver so much more. 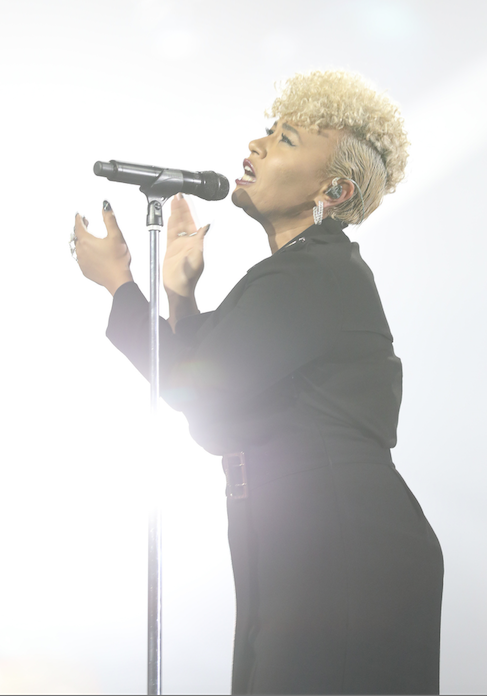 Since last years #britssowhite controversy, the leading body that oversees the show, the BPI, sat up and took note and engaged a diversity committee, which I am a part of, who in a few short months brought an overhaul to the BRITs voting academy and now 48% of voters are female and 21% are of black or ethnic origin.

There was clear, positive change and this was reflected in this years nominations, which did include a plethora of previously excluded British black music acts. Many grumbled about the fact that they didn’t win. They did. They won the start on an equal playing field that can only get stronger moving forwards. Small steps lead to great leaps. 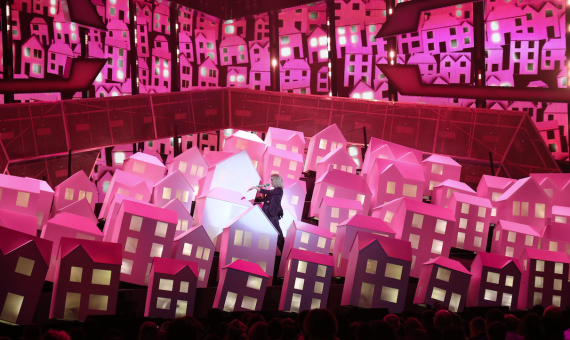 Speaking of great leaps, Katy Perry’s set saw her dancing and singing amongst hundreds of mini houses and two giant puppets that everyone suggested were Donald Trump and Teresa May. It wasn’t too obvious who they were but it did feel like a political statement of some sort. 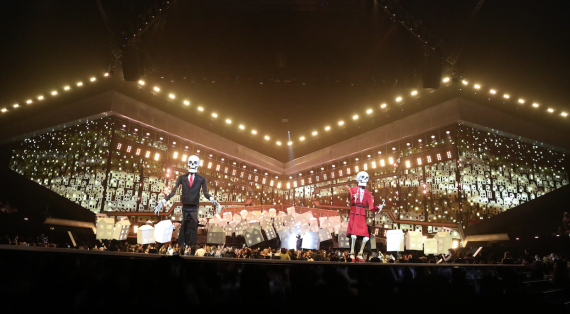 The end of her set saw Katy literally bringing the house down, when one of her ‘dancing houses’ fell off the front edge of the stage, onto a record label table, causing them all to leap to their feet in shock as security ran to help the poor girl. Hope she / he is ok.

The 1975’s Matt Healey must’ve loved Katy’s political commentary, as earlier in the evening in his winning acceptance speech, he urged pop stars to go ahead and comment on social issues and not as some demanded ‘’stay in their lane’’. I totally co-sign that when you have a platform to speak to the world, you should always say something with impact and merit.

Ed Sheeran is an act that never ‘stays in his lane’ and always seems to do more for diversity than most of the rest of our industry put together. This year he made a track with an afrobeats star Fuse ODG in Ghana and last night when he featured grime megastar Stormzy in his set too, the whole arena was jumping and dancing. 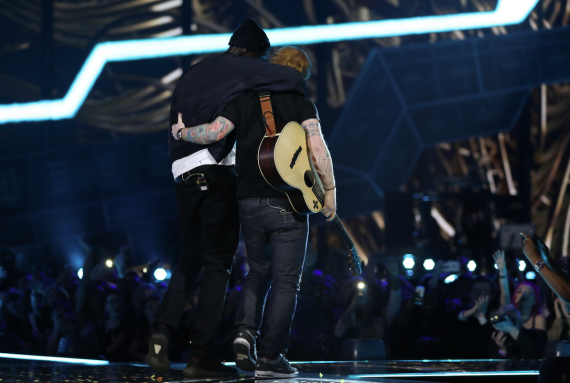 In fact, there were only two moments in the whole show that the arena audience were all spontaneously up on their feet for – during Skepta’s solo set and Ed and Stormzys set. This should’ve been the final performance of the night – Robbie Williams – even with all the production sexiness didn’t have as big a song or the mega public presence this year. 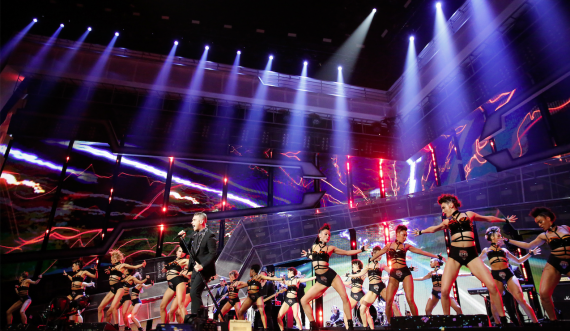 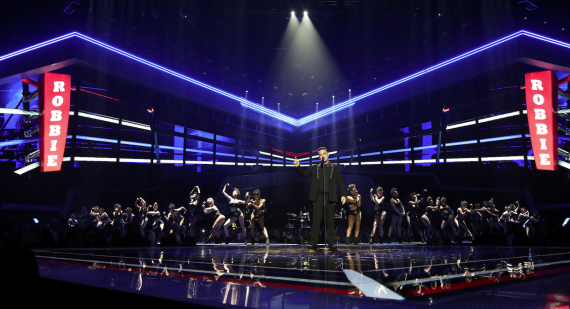 A man that has been all over the global charts with his incredible catalogue of effervescent hit songs this year is Bruno Mars, who was as swagtastic as ever, but whereas once upon a time The Brits show was dominated by the Americans, this year the Americans just felt like side-line guests. The stars were certainly the British acts.

A British singer that’s single-handedly made industry execs sigh with relief over their bank statements is North London lass Adele, who won the Global Success award and made a typically Adele-esque speech via video from distant lands where she is on tour. 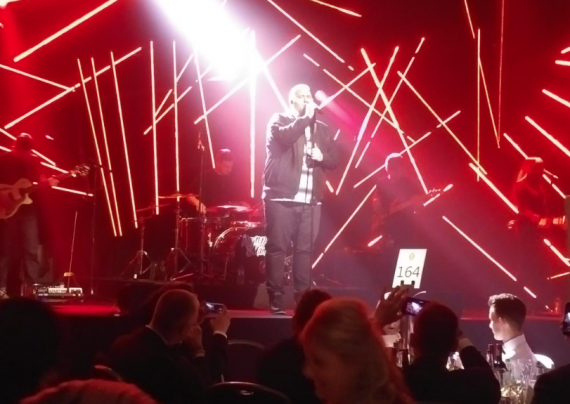 Soul music is coming back. With Rag n Bone Man (Rory Graham), being the actual biggest winner of the night, it wont be long before we’re all loving and singing soul again. Rory didn’t milk his big moment at all. He’s clearly still like a rabbit in headlights about his incredible success. At some points of the past year, his music has outsold the rest of the top 20 chart acts combined. 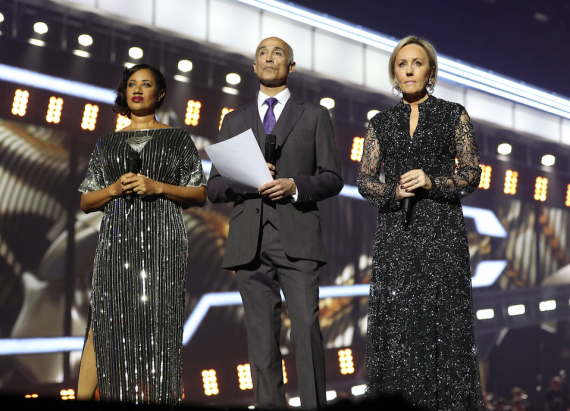 ANDREW RIDGELEY, PEPSI AND SHIRLEY – AN ODE TO GEORGE MICHAEL.

The celestial moment of the night came with the George Michael tribute, by Georges ex Wham band mate Andrew Ridgeley and their band-mates Pepsi and Shirley, who all made touching heartfelt speeches during which you could’ve heard a pin drop in the arena filled with thousands. This was followed by Coldplay frontman Chris Martin singing A Different Corner (originally released on Wham!’s 1986 final album Music From the Edge of Heaven). 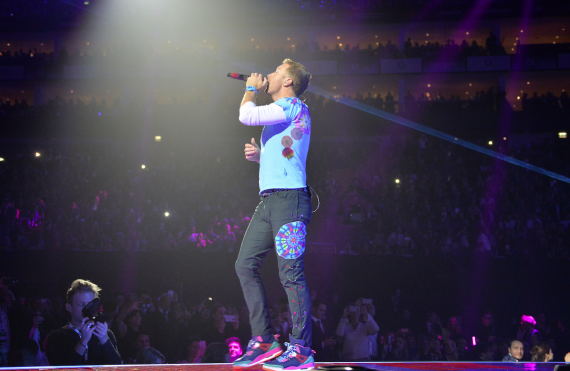 Chris sang a ‘’live meets video’’ virtual duet. It was clear after watching ‘live Chris’ VS ‘video George – from his last UK tour – that the two performers are on totally different performance levels and George was in a class of his own with that megastar soulful voice. 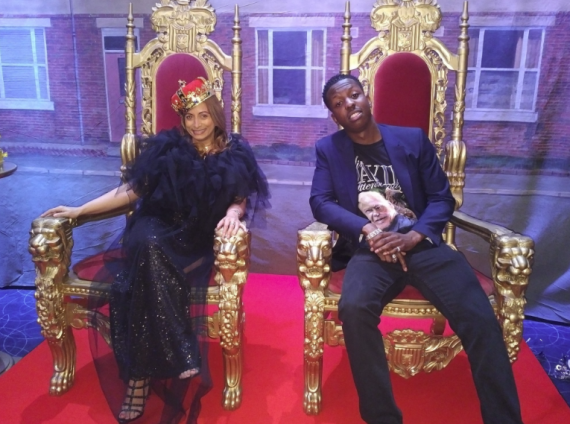 The night highlighted, that we Brits punch well above our weight in the global arts and culture big picture. In these turbulent Brexit filled days, the UK music industry is a great global brand that reminds us, that as Mayor Sadiq Khan keeps reminded us #LondonIsOpen.

Remember, as you imagine that performing artists are just all one big frivolous song n dance, that it takes hundreds in teams behind each one to make an impact and generates millions for the UK economy.
In fact, check out these stats; one in every 6 albums bought globally is buy a British act. Seven out of ten of the UK’s top albums last year were by British acts. 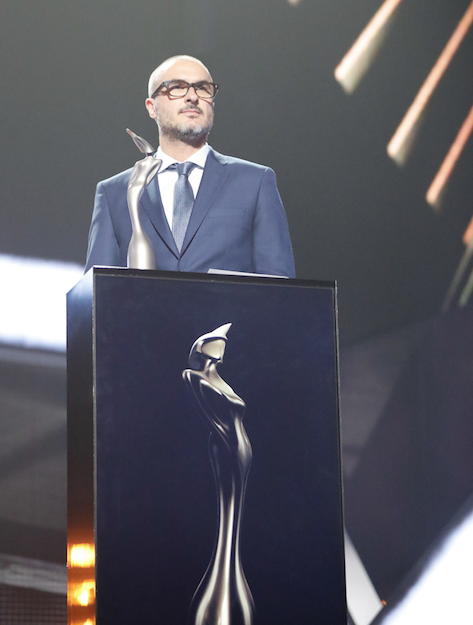 The UK music industry has a billion audio streams a week and the vinyl resurgence continues to grow.

An oft-neglected fact is that the Brit Awards also raises a lot of money for The Brits School in South London, where hundreds of diverse young students are trained to be the stars and staff of our future media,in order to ensure that our arts and culture industry remain amongst the best in the world. 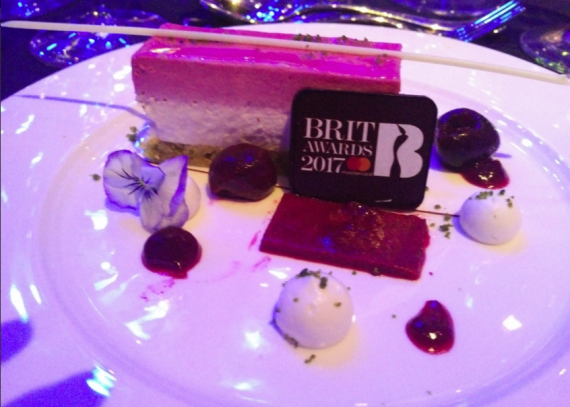